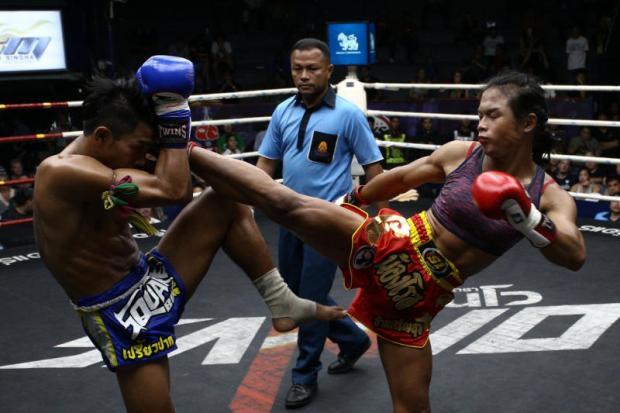 Clad in a pink tank top and shorts, her face made up with rouge and red lipstick, transgender Muay Thai fighter Nong Rose Bancharoensuk is a formidable opponent.

“I wasn’t able to fight her strength and big build,” Priewpak said.

“She fights like a man because she is really a man,” added Priewpak, who suffered a gash above his right eye in the fight at Bangkok’s Rajadamnern Stadium.

It was the second consecutive win for Nong Rose in the revered Muay Thai arena after becoming the first transgender boxer to fight there last month.

The crowd was clearly in her corner, cheering wildly for her throughout.

“Being a transgender doesn’t mean that we’re weak,” Nong Rose said after the fight. “We can achieve anything as well.”

Born Somros Polchareon, Nong Rose said she identified as a woman at an early age and began wearing make-up and a sports bra in the ring.

In the rural towns where she has done most of her fighting, her appearance disconcerted some of her male opponents.

“They would say they didn’t want to fight with a gay person, as it would be embarrassing if they won or lost,” she said.

“I still face those insults, but I don’t care about them.”

Thailand is widely seen as a paradise for gay and transgender people, but many say they are treated as second-class citizens.

Transgender women figure on television, in beauty pageants and at hair salons and cosmetics counters, but they cannot change their gender designation on identity papers, despite a 2015 law against gender-based

This site uses Akismet to reduce spam. Learn how your comment data is processed.